Just put in your info and we'll send the details! 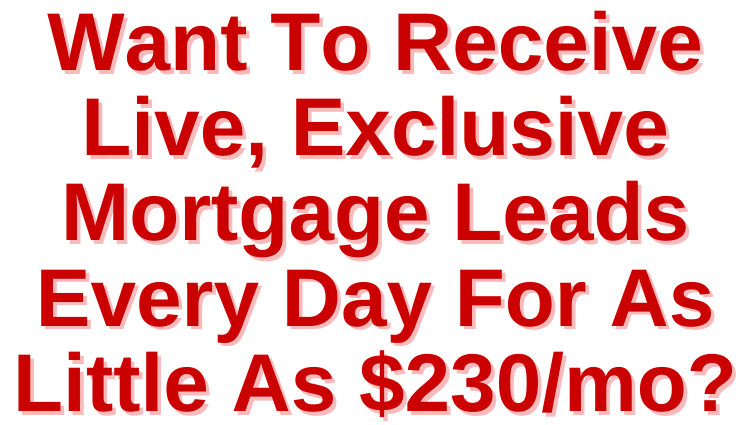 And have appointment setters making the calls?

Want to fill your pipeline with 4-10 deals per month for just a few hundred bucks (rather than several thousand)? 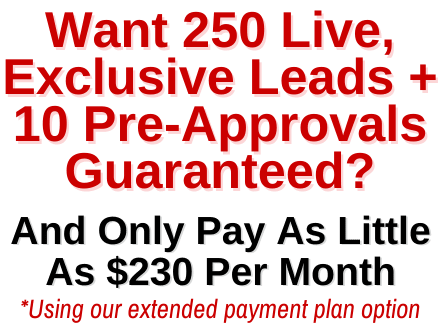 Click Here To Get Info By EmailBecause I'm not ready to book a call just yet.
Click To Book A Call

We know, it sounds to good to be true right?

You're probably thinking...
"There's got to be a catch" or...
"These must be garbage leads" or even...
"The leads can't be live & exclusive"
The fact is...
None of these things are the case
We only offer world-class lead gen programs and...
The simplest explanation is:
We've created an amazing payment plan option (that's all)
And it makes way more sense (for most people) than spending $1000's upfront & out-of-pocket
Most 'similar' lead programs want $2500-$5000 right away
We realize, for many MLO's that's out of reach
Some would say its "Ridiculous!"
To make matters worse,
If you want to keep leads flowing...

Other lead programs require the same BIG payment again each month
That can be a big "OUCH!"

So we fixed that problem, and another really BIG one...

One of the biggest problems MLOs face when buying leads...
Is also the most overlooked!
Leads aren't converted overnight
Nor do they magically appear all at once
(If they're live & exclusive like ours)
In A Best-Case Scenario...
It will take at least 6 weeks to close your first deal
And probably another 2-4 weeks before you get paid on it
That's a LOT of time right there, and...
In An Average-World Scenario...
Most leads don't fully convert into closed deals for 3+ months
It's not a lead quality issue (but it's not rocket science either)
It's simply because there are steps in the conversion process...

- Lead arrives
- Appointment happens
- App is taken (often on a later date)
- Pre-qualification begins
- They shop for a home
- They find the home
- They close
- You get paid!
If each step took 1-4 weeks...
The time before you make any money can really add up
Since we've already worked with 2000+ MLO's and helped them fund over a Billion in deals...
We know (as a fact), with all these steps in play...
The first full conversion probably won't happen for 3 (or more) months after lead-flow starts
This is true for ANY & ALL lead programs!
(These steps aren't different with other lead programs.)
If you're spending $1000's per month on a leads...
That can equal a ton of money spent
And no $$$ in return for quite a while
It's a cashflow bummer!

A Low Investment Should NOT= Low Quality

A Better Option Does NOT = Cutting Corners

Whether this is your 1st encounter with us...
Or you've known us for a while
You should know...
We haven't changed our world-class lead generation programs
(Except for the many improvements we've made since 2016)
Our programs still include...
- Fresh, exclusive leads flowing in daily
- Appointment setters to book calls
- Live coaching for our clients
- High-tech lead follow-up
- Top-notch support & training
- Lead quantity guarantees (80+/mo)
Some programs even include...
- Money-back guarantees
- Lifetime service without fees
- - - - - - - - - -
So NO, we didn't cut corners...
We just changed the way this is paid for
It's a no-brainer for most MLOs!
But that also means...
We are NOT a 'cheaper alternative'
We just have a better option to participate...
(Without losing sleep at night over a 'scary' investment)

So if you're looking for a really cheap option: That's not us!
But we might be just right for you if you see why this is a smarter way to take advantage of...
A proven lead program that can help you exponentially grow your business without breaking the bank.

So if you're ready to explore our options that cost as little as $230/month, book a call!

p.s. Options on this special offer range from about $230 to $500 depending upon the program you'd select and a few other factors.  But we still have more 'normal' payment options too!